The New York State Network for Youth Success is the new, more inclusive name for the organization formerly known as AfterSchool Works! NY: the New York State Afterschool Network (ASW:NYSAN). This new name went into effect on May 1, 2016.

The organization formed as the New York State School Age Care Coalition in 1995. It became AfterSchool Works! New York (ASW) in 2008. ASW was the official state affiliate of the National Afterschool Association and served as a non-profit membership association for afterschool professionals in New York State. ASW administered the New York State School Age Care Credential, The New York State AfterSchool Accreditation Program, and an annual Training Institute. In addition, through an extensive network of intermediaries, training organizations and child care resource and referral agencies, it provided information, training, and support to afterschool professionals in order to build high-quality, sustainable afterschool programs that meet the needs of children, youth and their families.

The School Age Credential continues to promote quality services to children and families by providing specific standards, training and evaluation for afterschool professionals. Training for the credential is available via face-to-face programs that are offered by local host agencies as well as through a full distance learning model.

The New York State Afterschool Program Accreditation Model reflects the collective wisdom from the afterschool / youth development field and is modeled in part after the National Afterschool Association accreditation framework and the Quality Self-Assessment (QSA) Tool.

In 2008, NYSAN completed the Quality Self-Assessment (QSA) Tool, a nationally recognized tool to assist program staff, young people, parents, school leaders, and other stakeholders in building the capacity of their programs. The QSA Tool has been adopted by the New York State Education Department, New York State Office of Children and Family Services, New York City Department of Youth and Community Development, and many other groups across New York State and nationally.

The Network is now part of a national network of 50 statewide networks supported by the Mott Foundation. NYSAN grew to an organization with ten affiliated regional networks and hundreds of participating partner organizations statewide.

The work of the Network is made possible through the generous contributions of its public and private supporters, which currently include:

Because of the legacy of ASW and NYSAN, The Network is the only statewide organization in New York State that brings together public and private sector leaders around a common agenda focused on building a high-quality system of expanded learning opportunities (ELOs) that support all young people in New York State in achieving success in school, work, and life. 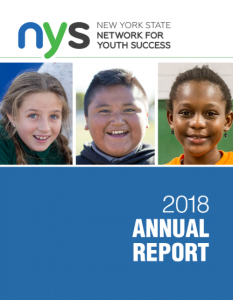